Florida’s Space Coast Named “Turnaround of the Year” by SpaceNews

Florida’s Space Coast has been selected Turnaround of the Year for the 2018 Awards for Excellence & Innovation by SpaceNews. 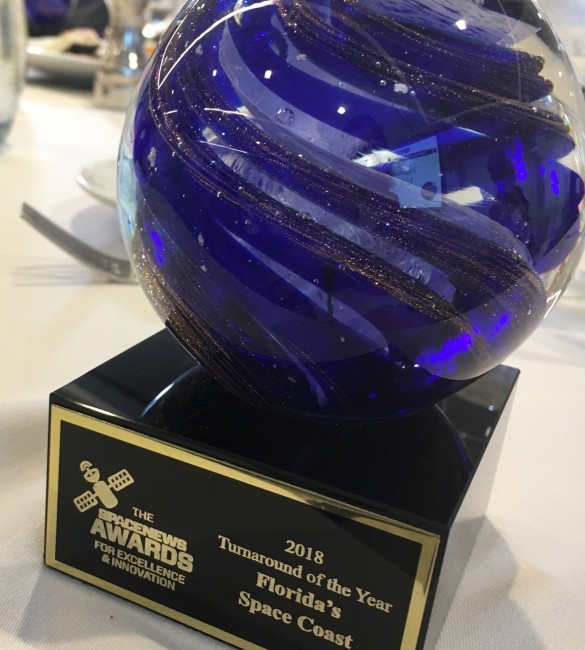 Space Coast, FL (December 3, 2018) – Florida’s Space Coast has been selected Turnaround of the Year for the 2018 Awards for Excellence & Innovation by SpaceNews. The Awards, which were established to honor individuals and organizations making a significant impact in the space industry, were announced Monday, December 3 at the Washington Space Business Roundtable in Washington, D.C.

Brevard’s economic turnaround remains one of the largest in the state. The Space Coast unemployment rate in November 2010 reached a high of 11.8%, today, it is only at 3%. Additionally, Brevard’s spaceport remains the most active orbital launch site in the world with 19 successful launches in 2017. The Space Coast could see as many as 48 launches per year by 2021, with projections of many more than that in the future. Together, the Economic Development Commission of Florida’s Space Coast (EDC), Space Florida, NASA, the Air Force and industry, along with many community partners, have redefined, refocused and reimagined Brevard’s role in the next era of space history.

Florida’s Space Coast was selected the winner for this category of the SpaceNews Awards for Excellence & Innovation following an open nomination, reader poll, and the deliberations of a panel of SpaceNews editors and contributors.

The winners of this year’s awards will be profiled in the December 3, 2018 issue of SpaceNews magazine.

“Florida’s Space Coast isn’t just our Turnaround of the Year, it’s also an early frontrunner for our turnaround of the decade. The community is being honored for working together to turn the end of the Space Shuttle Program into a new beginning for Florida’s Space Coast region, said Brian Berger, SpaceNews editor-in-chief. “To us, one of the clearest signs the Space Coast had rebounded economically is that there is now space commerce on Space Commerce Way. Blue Origin opened a new factory this year across the way from where OneWeb stands to build thousands of satellites for its broadband constellation. NASA’s commitment to turn Kennedy Space Center into a ‘multi-user spaceport’ has sparked an increase in launch activity that’s helped stimulate tourism to the point that Space Commerce Way now needs to be widened to accommodate extra traffic.”

“This recognition reflects the hard work of our community. The Space Coast is truly an economic success story not just because of our ability to accomplish this tremendous turnaround, but to do so in such a short amount of time,” said Lynda Weatherman, President and CEO of the EDC. “There is still much to be done, and I look forward to working with our partners as we continue to strengthen our success story, which is not just unique to our country, but to the world.”

“It is an honor for Florida’s Space Coast to receive this recognition from SpaceNews,” said Space Florida President and CEO Frank DiBello. “From an increased launch cadence to the rise of rocket and satellite manufacturing, and the growing supply chain in between, it is unmistakable that the Space Coast is in the midst of a renaissance. Florida has the kind of business operating and living environment that next generation aerospace development and manufacturing companies need to thrive. in, The Space Coast is now well-positioned to dominate the future of this industry.”

“With more than 90 commercial partners, we are now a true multi-user spaceport successfully supporting a variety of different industries. Kennedy is an integral part of the local economy, providing nearly 10,000 jobs for civil servants, contractors, tenants and construction crews, and it’s going to continue to grow. This is truly an exciting time for NASA, the Space Coast and our Nation as we embark on a new era of space exploration,” said Robert Cabana, Director, NASA Kennedy Space Center.

About the Economic Development Commission of Florida’s Space Coast

Space Florida was created to strengthen Florida’s position as the global leader in aerospace research, investment, exploration and commerce. As Florida’s aerospace and spaceport development authority, we are committed to attracting and expanding the next generation of space industry businesses. With its highly trained workforce, proven infrastructure and unparalleled record of achievement, Florida is the ideal location for aerospace businesses to thrive – and Space Florida is the perfect partner to help them succeed. www.spaceflorida.gov