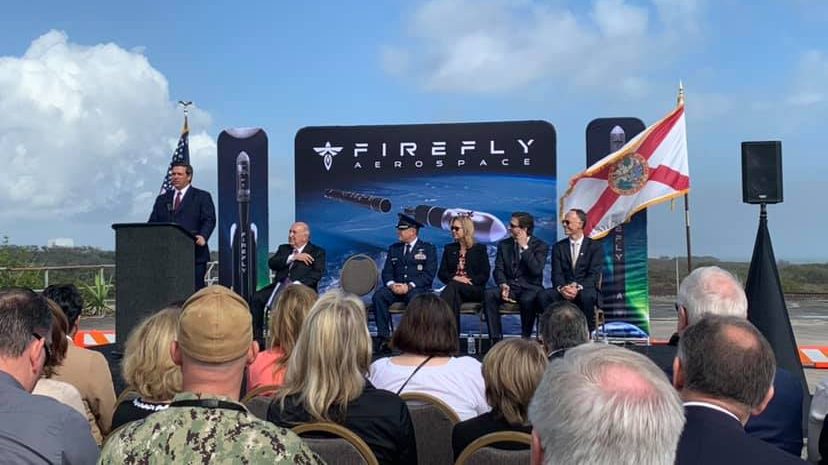 CAPE CANAVERAL SPACEPORT, Fla. and CEDAR PARK, Texas (Feb. 22, 2019) – Firefly Aerospace, Inc. (Firefly), a provider of economical and dependable launch vehicles, spacecraft and in-space services, announced today the execution of a binding term sheet with Space Florida, under which Firefly will establish business operations at Cape Canaveral Spaceport, including launch operations at historic Space Launch Complex 20 and manufacturing facilities at Exploration Park, Florida. Firefly’s announcement is concurrent with its receipt of a Statement of Capability from the 45th Space Wing.

As Florida’s spaceport development authority, Space Florida will enable the company’s Florida operations by matching the company’s infrastructure investments up to $18.9M via the Florida Department of Transportation Spaceport Improvement Program. Firefly will invest $52 million and will bring more than 200 high paying jobs to Florida.

“Firefly Aerospace is proud to be the newest member of the Florida Space Coast family,” said Firefly CEO Dr. Tom Markusic. “Our mass production manufacturing facility in Exploration Park will enable Firefly to produce 24 Alpha vehicles a year, enabling a launch cadence that will support a rapidly expanding global small satellite revolution and the commercialization of cislunar space.”

“As the world’s premiere gateway to space, Florida remains the preferred launch site for sending humans and cargo into space,” said Governor Ron DeSantis. “Firefly’s decision to establish launch and manufacturing activities on Florida’s Space Coast confirms the commercial advantages of conducting business in our state and reaffirms Florida’s position as a national leader in innovation and job growth.”

“Space Florida is pleased to welcome Firefly Aerospace to the Cape Canaveral Spaceport,” said Frank DiBello, Space Florida President and CEO. “Firefly’s presence in the State of Florida further solidifies that Florida’s Spaceport System is poised to lead the world in this next space era. We look forward to the new launch and manufacturing capabilities that Firefly brings to SLC-20 and Exploration Park, respectively.”

“The 45th Space Wing welcomes new launch providers who wish to assist in furthering America’s assured access to space. The Statement of Capability represents an important first step for Firefly Aerospace to obtain certification for launch operations on the Eastern Range,” according to John Way, 45th Space Wing spokesperson.

“The space industry is expected to be fastest growing segment of the worldwide economy in the coming decades, with analysts predicting a global market of over a $1 trillion a year by 2040,” said Firefly CEO Dr. Tom Markusic. “Firefly Aerospace is uniquely positioned to be successful in this new economy. With launch sites on both coasts and a mass production facility to support future growth, our global team of over 300 highly accomplished engineers and technicians will provide space solutions from LEO to the surface of the Moon and beyond.”

“We are proud to partner with Space Florida in welcoming Firefly Aerospace to our growing space community,” said Lynda Weatherman, President and CEO of the Economic Development Commission of Florida’s Space Coast. “We look forward to working with them in expanding 21st century job opportunities here in Brevard County with this new a state-of-the-art manufacturing facility.”